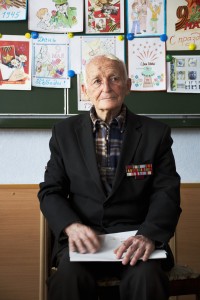 Through the time
In spite of their age, veterans of the Second World War try to lead an active lifestyle. They don’t stop going out and want to influence on the young generation. Today Alexander Nadtochiy has visited my school. He is 90 and seems to be a communicative and outgoing person. We were told many breathtaking stories about deeds of the veteran’s friends. Unfortunately, most of that friends died during the war. After the veteran had told us all he wanted, we got an opportunity to interview him. But it was really difficult, because Alexander is a little deaf. Saying the truth, it isn’t strange: Nadtochiy has contusion and several wounds. He took a part in liberation of the very important place on the Donetsk region map – Saurmogila. By the way, this summer many soldiers died fighting for Saurmogila too. So, our world hasn’t changed in big deals. And I can only suggest following hippies. Let’s make peace, not war.”